Decide to Sell
— A VPA Perspective

The Entrepreneur’s Dilemma: Selling Your Business During a Growth Phase

Over the course of the last 5 to 10 to 15 years, you’ve built a company that’s growing in value at a rate to dwarf the market—something most entrepreneurs only dream of.

In your current situation, you might come to the conclusion that you should ride the wave as long as possible, growing the value of your company and your equity along with it. Once growth plateaus, then you should sell, right?

Waiting for company growth to plateau (or expecting to predict an upcoming plateau and sell the company before then) is not a good exit strategy. Here’s why.

The Dilemma: Why Sell When I’m Winning?

As we at Vista Point advise high-growth companies about the right time to sell, we often get the question, "Why would I sell when I’m growing 30% YoY? Where else can I get that type of return?"

The question is valid and the logic seems sound, because when you grow your business 30% each year, then you’re likely increasing the value of your equity at roughly the same rate, which is a lot of value creation.

But consider the following:

You have a highly concentrated financial risk in a single asset

Having all your assets tied up in a highly valuable company is a high-class problem, one many people wish they had.

But there’s a reason private equity firms, venture capital firms, financial planners, and wealth management professionals don’t put all their eggs in one basket but instead spread their assets across multiple investments: If something goes wrong with one investment, they don’t want to lose their shirts.

You may feel equipped to manage the challenges your business may face in the future. After all, no one understands the state of the company better than you after pouring your blood, sweat, and tears into it over the last batch of years. But even you can’t fully predict the future of your company. If the company experiences challenges, your only asset is at stake. 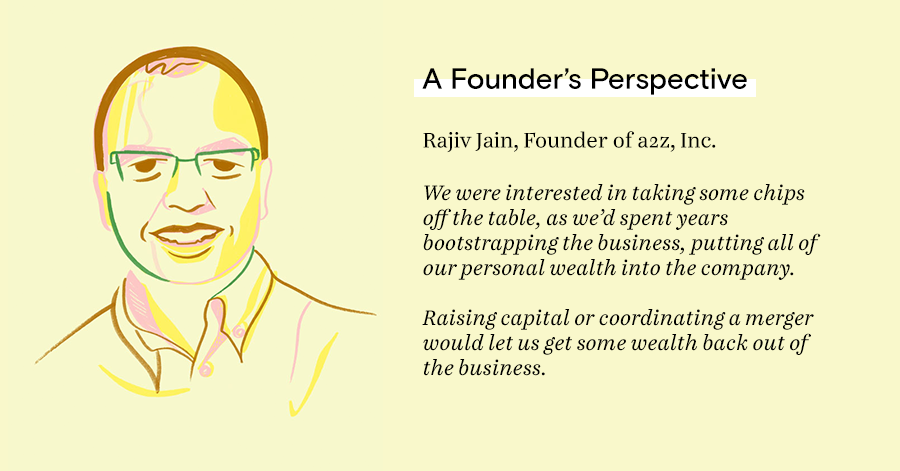 Your attitude will change with time

When you first started, you probably took some pretty huge risks to get to where you are today. But now that all your personal wealth is tied up in a high-value business, taking huge risks and betting the farm on big moves doesn’t seem as exciting.

Instead of seeking out risk, you’ll probably start doing your best to avoid it. You might find yourself thinking more about protecting a business that is clearly valuable and the sale of which represents life-changing amounts of money. 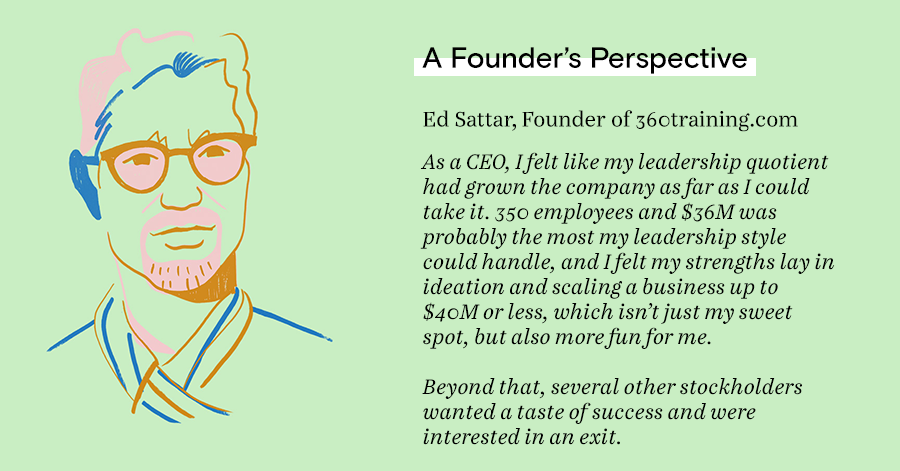 A common fallacy entrepreneur’s fall into is the idea of being able to predict and sell before a plateau in growth or an economic downturn.

While entrepreneurs are good at being optimistic, they are by no means clairvoyant. Founders might be fooling themselves if they think they can see a plateau coming.

Plateaus are impossible to predict because changes in business performance can come from various forces, including forces that are completely outside of your control. Consider what happened to the value of companies and the economy when:

The above examples only illustrate extreme, worldwide market movements—they don’t take into account the thousands of industry specific changes like the emergence of unforeseen competitors, changing regulatory conditions or evolving customer preferences. When an unexpected plateau hits, you’re going to leave a lot of money on the table because informed buyers don’t pay premiums for plateaus. 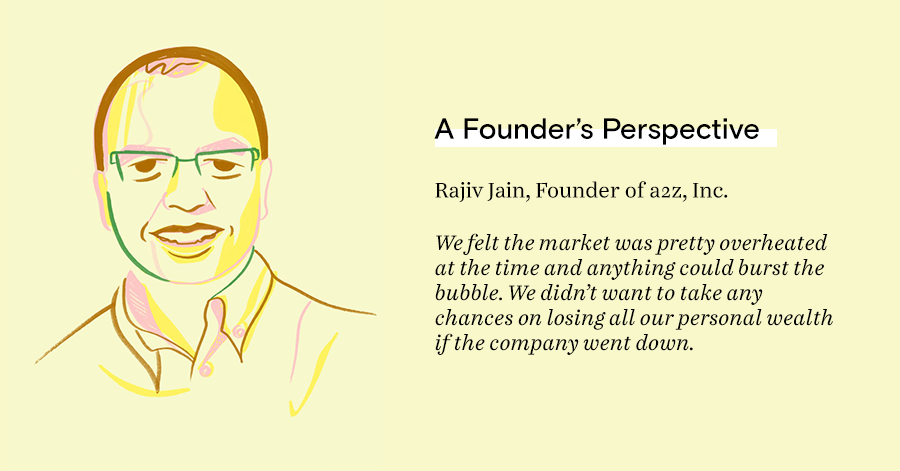 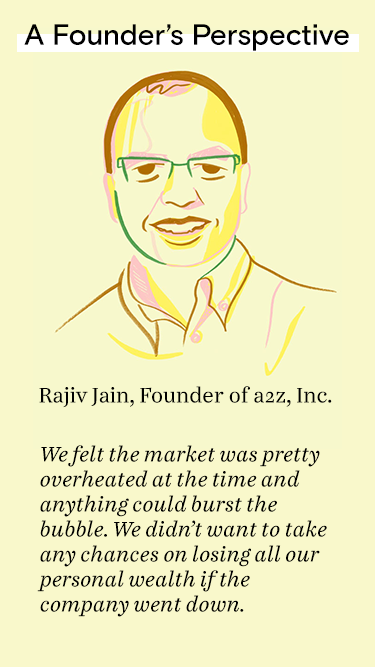 In any transaction, buyers are trying to answer the following questions:

Strategic buyers and private equity firms are going to do their homework. They’re going to pick up on any whiff of impending growth slowdowns or growth challenges.

As a result, you should sell into growth. Founders will experience a HUGE difference in valuation when selling into strength vs. selling into a plateau. If you wait for a negative outcome like a plateau or downturn to trigger your sell reflexes, you’ll be in a weaker position relative to buyers and will lose out on what’s known as the multiplier effect.

The Multiplier Effect: What Really Drives a High Valuation

As you’re well aware, the value of your company isn’t just based on revenue or profitability for the current time period, but on expected value generated over time. Most often, a valuation is estimated based on a multiple of revenue.

Why is this important? If you can identify ways to improve the multiple, then you increase the perceived value of your company for buyers.

To answer founders’ primary concern of why sell when they’re winning, the reason is you want to take advantage of the success and strength in the business and capitalize on this as a growth multiple for the business.

If you wait for growth to slow, then:

As companies pass certain revenue milestones, their valuations tend to make a jump. At Vista Point, we tend to see step functions on valuation at $10M and $25M ARR for SaaS businesses.

Buyers pay attention to these milestones—if you hit a milestone recently, you probably started receiving calls from interested buyers. Their interest in your company will manifest itself in the multiple they use to value your business. 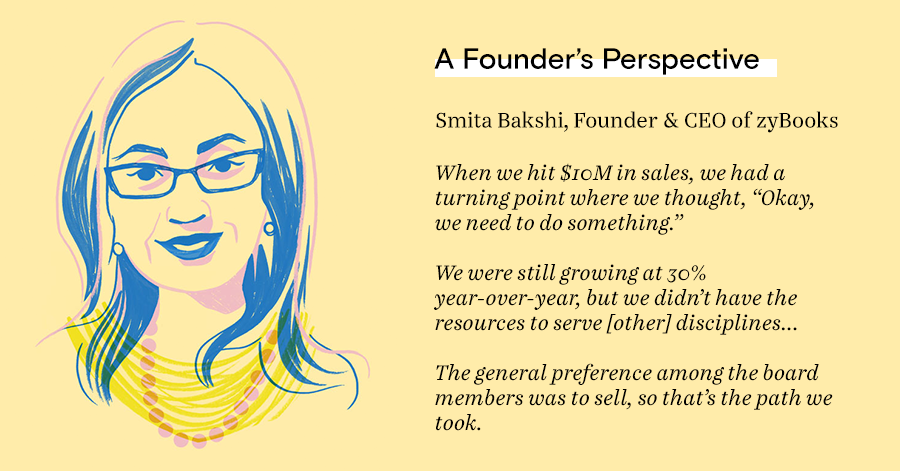 Which Is Worse: Selling Early or Selling Late?

As we’ve already acknowledged, timing a sale at an exact peak is impossible. By the time you recognize a peak, you’ll end up selling late at a lower multiple.

But if you sell too early, even at a high multiple, couldn’t you end up leaving a lot of money on the table? Yes, that’s the trade-off. But here are some important points to consider.

If you sell early, you do take a potentially large sum of money off the table. But, you also have ways to structure your finances to capture additional upside. For example, you could:

If you sell late, well, that’s tough. You had an asset worth a lot of money months or years ago, and now it’s not. All the while you’ve spent time focusing on the business when you could have been starting a new business or doing something else with your time. This regret is painful, and can lead to bitterness.

Timing does play a role in selling your business, but the primary goal is to diversify your assets and improve liquidity so you don’t lose your shirt.

There are several solutions to the liquidity problem, some better than others.

One solution: Take out cash from the business

Some founders will try to solve the liquidity issue on their personal balance sheet by taking cash distributions out of the business during times of profitability. However, this might not be the best long-term tactic for improving the enterprise value of the business.

For instance, if you take away cash-flow that could have been directed to revenue-generating initiatives, you’ve hurt the equity value of the business. The decrease in value isn’t dollar-for-dollar the amount you took out of the business, but much higher due to the multiplier effect.

In addition, you also might change the valuation paradigm, causing buyers to value your business as a multiple of EBITDA instead of revenue, which will significantly hurt the long-term equity value of the business.

On top of all that, if you take out dividends/distributions, you’ll be taxed at the personal income tax rate on that income, as opposed to putting the money back into the business and pulling it out with more favorable tax structuring during a sale of the business.

A better solution: Bring on a capital partner

Instead of stunting the growth (and value) of your business by taking out cash distributions, bringing on a capital partner can help you achieve liquidity while also maximizing your outcome.

When you sell your business, you’re not restricted to a full-sale. You have several options for the transaction, depending on your financial goals and your goals for the business. A few include:

The below infographic demonstrates how bringing on a capital partner is better in the long term for gross proceeds to the founder.

More Reasons to Sell Other Than Liquidity

Liquidity is a primary goal of many of our clients, but each founder has their own reasons for selling. Some common reasons we hear include: 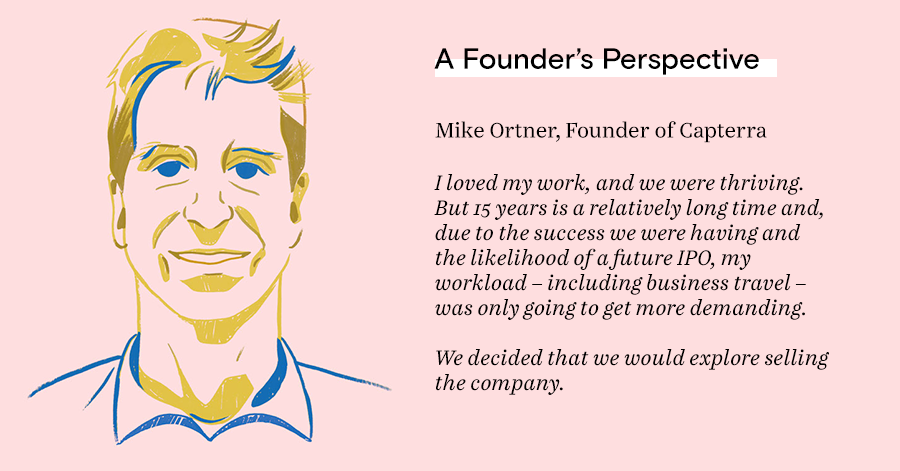 Regardless of your reasons, an eventual sell is in your best interest. Making the paradigm shift to selling into a growth phase can be difficult, but the ultimate outcome is well worth it.

Modified on Jun 19, 2020
For Founders
::
Decide to Sell
Receive monthly insights about what a founder should know along the path to exit.