Pricing a SaaS product is a fundamental aspect of a software company’s overall strategy—and one of the most pressing issues that a founder and executive team will have to decide on.

To understand how some of the best performing SaaS companies price their products, our team analyzed 403 SaaS companies on the Inc. 5000 list of fastest growing companies. Some of the questions we answered include:

Read on to see what we found.

Note: The information contained herein is not meant to be conclusive about the software industry as a whole or prescriptive in any way. Instead, the information is intended to help founders evaluate their own pricing strategy against the backdrop of a diverse pricing landscape made up of successful software companies.

What portion of the fastest growing software companies are SaaS?

Of the companies on the Inc. 5000 list, 573 were categorized as software. While SaaS has become the predominant model for running a software company, not all companies in the software category are true SaaS.

Based on this definition, 403 of the 573 software companies on the Inc. 5000 were SaaS companies. That 7 out of 10 of the fastest growing software companies are SaaS is not surprising, considering that contract renewals provide a platform on which a SaaS company can grow its revenue year after year. 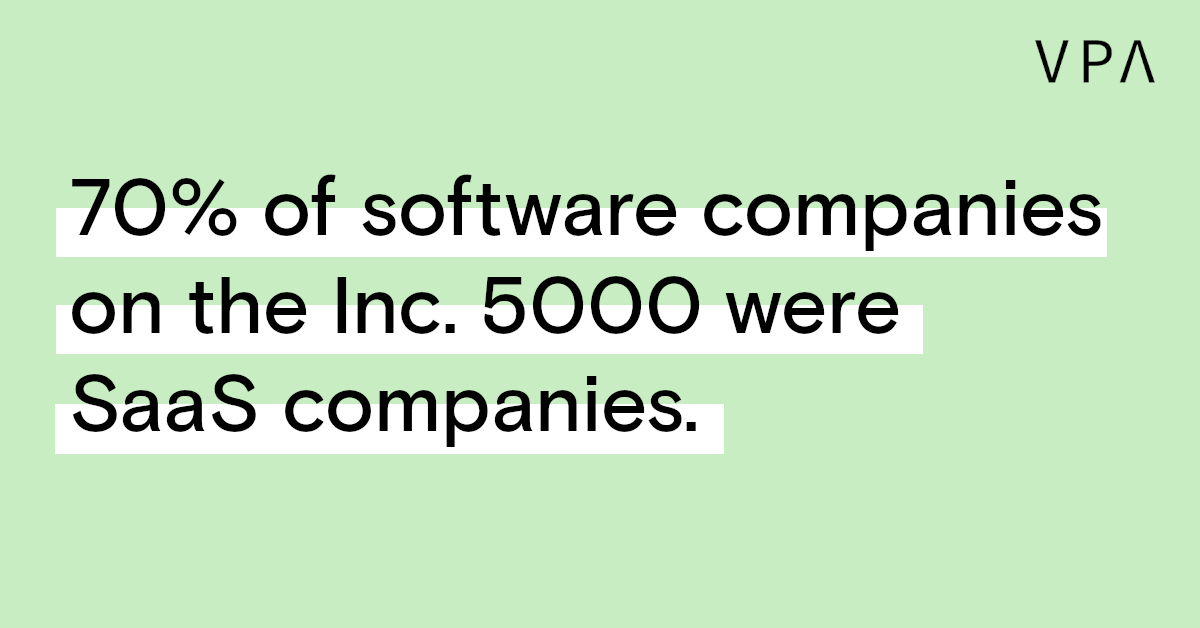 How transparent are SaaS companies about their pricing?

A discussion as old as SaaS is whether or not to be transparent about pricing. For the present, naysayers seem to have prevailed. 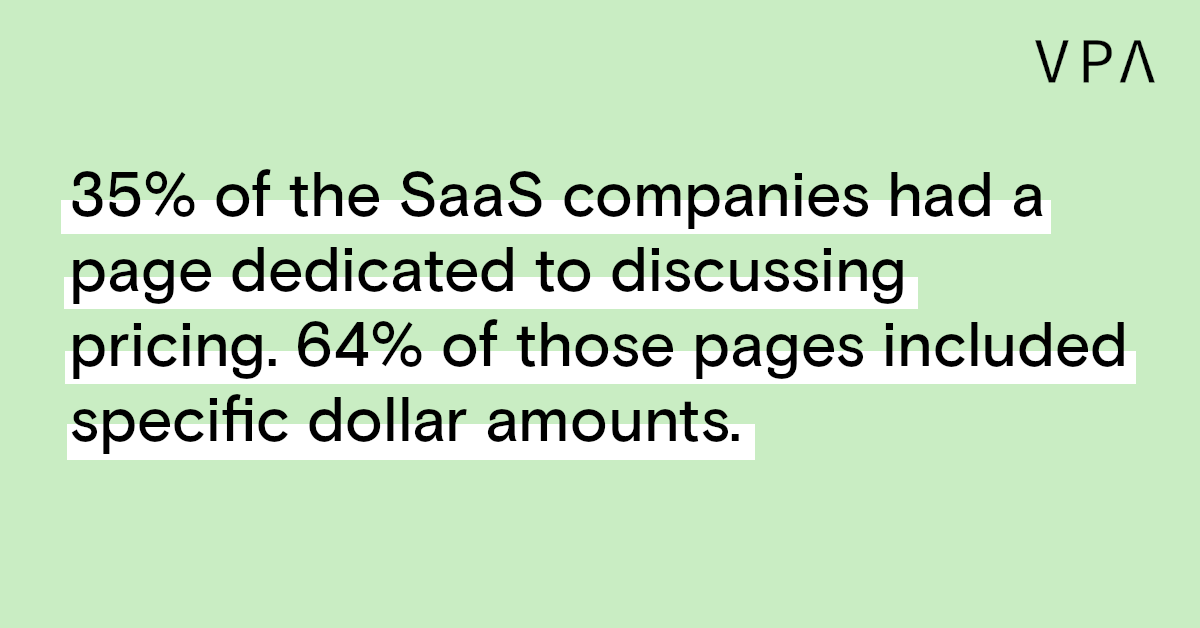 Of course, pricing transparency likely varies based on industry, audience, and the size of the price tag, among other factors. A general pattern we noticed was that companies that charged on a per-seat basis (instead of on a flat-rate or usage basis) were more open to listing specific dollar amounts:

* If you’re wondering why these percentages are all higher than the 64% average, it’s because not all companies’ pricing details provided enough information to classify under one of the three above pricing models (see the next section for more details). So, in effect, there’s a fourth group of companies whose pricing model was unclassifiable. Not coincidentally, the number of unclassifiable companies that published specific dollar amounts on their pricing pages was exactly 0, pulling down the average.

Of the 143 companies who published a pricing page, we were able to classify 85% of their pricing models as either a per-seat, flat-rate, or usage model.

Our classification was based on how the SaaS company priced its product relative to the purchasing entity, i.e. the enterprise. See the following definitions of each classification.

Per-seat pricing is when a SaaS company’s pricing is influenced by the number of licenses allocated to sub-entities that will be using the software within the enterprise. Some applicable sub-entities include software users, locations, etc.

Flat-rate pricing is when a SaaS company charges a flat rate for the entire set of software or a specific feature set to the enterprise as a whole. Pricing is not influenced by sub-entity users of the enterprise.

Usage pricing is when a SaaS company’s pricing is influenced by the number of units consumed within the software. The enterprise can pay either proactively based on estimated usage or retroactively based on actual usage. Common usage units include storage space, server hours, API calls, or financial transactions.

In cases where a company had multiple plans that would be classified differently, we selected either the plan that the company indicated was most popular or the introductory plan.

Based on these definitions:

*Of the 121 SaaS companies on the Inc. 5000 that provided sufficient information to classify their primary pricing model]

In most cases, a basic per-seat, flat-rate, or usage model is too simplistic to properly price a SaaS product. As a result, almost all companies will engage in some form of price discrimination via tiered pricing or secondary usage pricing.

In order to capture customers with differing jobs-to-be-done and varying willingness to pay, companies introduce tiered pricing and secondary usage fees on top of their primary pricing model.

Tiered pricing is when a company creates different subscription plans by limiting access to features or the number of seats for lower tier plans. For a usage-based pricing model, we considered volume discounts as tiers if the enterprise paid for estimated usage up front as opposed to retroactively based on actual usage.

Tiered pricing is very common—overall, 83% of the SaaS companies whose primary pricing model we could classify had some form of price tiering. 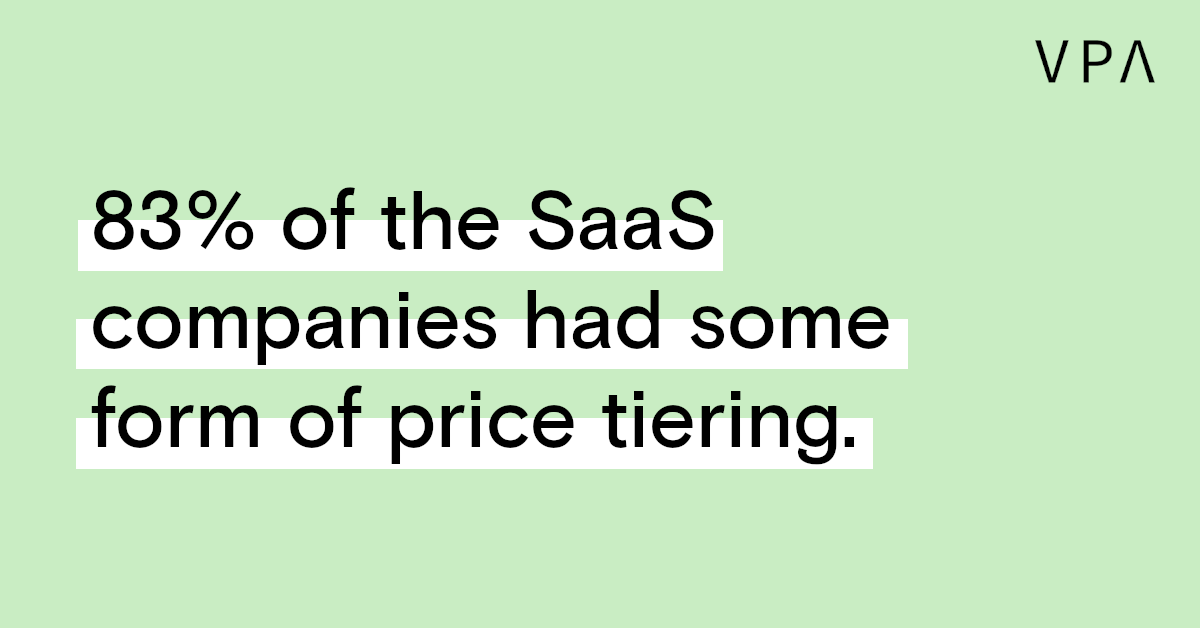 But tiering is less common for usage pricing: while companies with per-seat or flat-rate pricing each incorporated pricing tiers 87% of the time, those with usage pricing only introduced tiers 58% of the time.

Another way in which SaaS companies engage in price discrimination is by adding usage fees on top of a per-seat or flat-rate model. Secondary usage pricing is becoming more common and is a great strategy for SaaS companies to grow revenue on top of highly predictable subscription revenue. (One example is the addition of payment processing fees in vertical SaaS.)

Of the companies with a per-seat or flat-rate subscription model, 16% had some form of usage pricing as a secondary model. 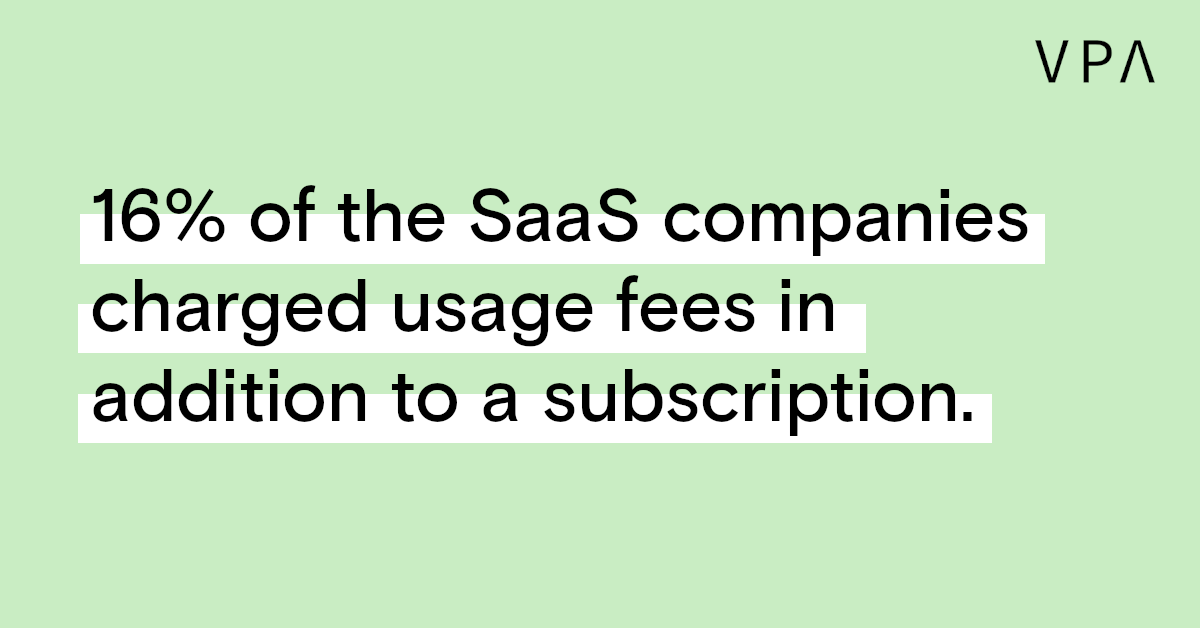 How often do SaaS companies bill their clients?

Intuitively, the frequency with which a SaaS company bills its clients will largely depend on the price tag, the nature of the software, and the type of customer the company serves. For example, a SaaS provider serving SMBs at a low price point is more likely to bill monthly than one serving large enterprises at a much higher price point.

Because SaaS providers serving large enterprises are probably more likely to sell longer-term contracts as well as withhold pricing details from public eyes, the below analysis is likely skewed towards companies serving the lower end of the market. Still, if not necessarily applicable in all cases, the information is nonetheless interesting.

Of companies that had a classifiable pricing strategy: 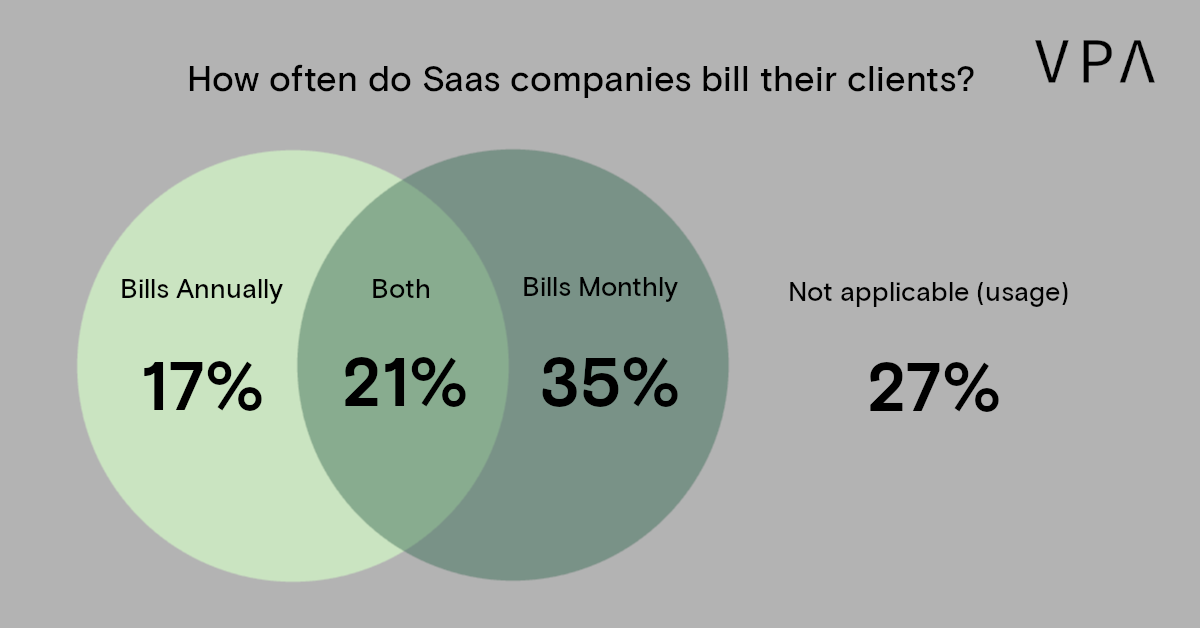 The remaining 27% represents companies who bill based on usage. These companies were not included in this analysis due to lack of available information regarding billing frequency.

A common practice for companies that have both a monthly and annual billing option is to offer a discount to customers if they opt for longer-term billing. Based on the 30 companies who offered both billing options, this discount ranged from 7.5% to 61%, with the average landing at 18%.

How common are free trials and freemium products?

A common customer acquisition strategy for SaaS companies is to offer a free trial or freemium product. For clarity, free trials allow customers to sample the full product for a limited time, while freemium products offer unlimited access to a limited feature set.

Free trials appear to be more common than freemium products: of the SaaS companies who listed a pricing page, 31% offered a free trial, while only 18% had a freemium product. 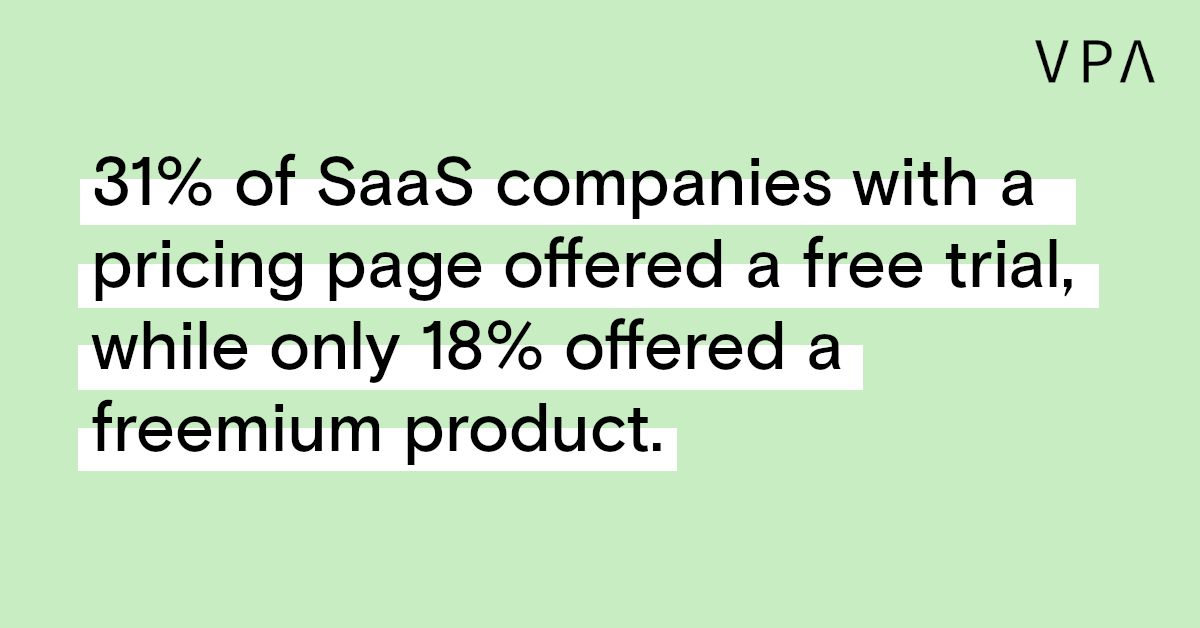 The length of a free trial ranged between 1 week and a full month, with 2 weeks being the most common length and the average just under 3 weeks.

Determining Your Own Pricing Strategy

How you ultimately model pricing will depend on how you deliver your software, how customers utilize that software, and how customers estimate the value your product provides. There is no best model and no pricing template that will work for everyone, but you can draw insight from observing how other SaaS companies model their own pricing in light of the insights provided here.

To learn more about the implications of the various models discussed above, take a look at our article about SaaS Pricing Models and Strategies.

Vista Point Advisors is a boutique investment bank that focuses on advising founder-led companies in the Software and Internet industries. We focus exclusively on sell-side M&A and capital raising transactions.

Learn more about our team or see our recent transactions.

Modified on Aug 16, 2022
News
::
Insights
Receive monthly insights about what a founder should know along the path to exit.