Founders of middle market internet and software companies with moderate growth (10-30%) could be affected to the tune of millions of dollars as a result of changes in the tax code proposed by president Joe Biden.

If put in place, the proposed hike in capital gains rates would significantly reduce the take-home amount founders receive upon the sale of shares in their business. As such, and in light of the Democratic party's newly gained control of the Senate, founders should evaluate timing a potential acquisition or capital raise in 2021 before such a tax change could take effect.

What Are President Biden's Proposed Tax Changes for Capital Gains?

Historically, federal and many state tax bureaus have instituted a lower tax rate on income from the sale of capital assets. Instead of taxing income from capital assets at the ordinary income rates, these entities created different or related brackets and rates.

Under the Tax Cuts and Jobs Act put into place in 2017, the tax rates on long-term capital gains (for capital assets owned > 1 year) were set at 0%, 15%, and 20% at the following levels of taxable income (or adjusted gross income):

As part of his presidential platform, president Biden has proposed changing the special treatment on income from the sale of capital assets. Joe Biden proposes that for individuals with taxable income greater than $1M in a year, their capital gains would be taxed as ordinary income under standard income brackets—up to 37% under current tax code and up to 39.5% as proposed by Joe Biden.

Because the net positive sale of business stock is considered a capital gain, founders need to consider how these changes could affect what they take home post-transaction on a full sale or capital raise and the timing of said transaction.

For example, consider a SaaS company with $10M in annual recurring revenue (ARR) at the beginning of 2021 growing at 20% YoY. (For simplicity, assume the founder owns 100% of the company and there is no state tax.) In a full-sale transaction and at the given growth rate, the company could reasonably sell at a 5x multiple—$50M. At the current long-term capital gains tax rate (assuming the founder has owned the company stock >1 year), the proceeds to the founder would be $40M (see table below):

Now consider what would happen if this same founder waited until after the tax change (potentially the end of 2021 or beginning of 2022). While revenue would have grown 20% (another $2M in revenue and additional $10M in enterprise value at a 5x ARR multiple), unfortunately the math doesn’t play out in the founder’s favor due to the increased tax rate—instead of taking home $40M, the founder takes home $36.3M.

* Assumes the founder is filing singly. Tax brackets and rates are based on 2020 tax code, with the exception of the highest bracket, which is set to Biden’s proposed rate.

† The net present value of the proceeds, discounted at an 8% investment rate. 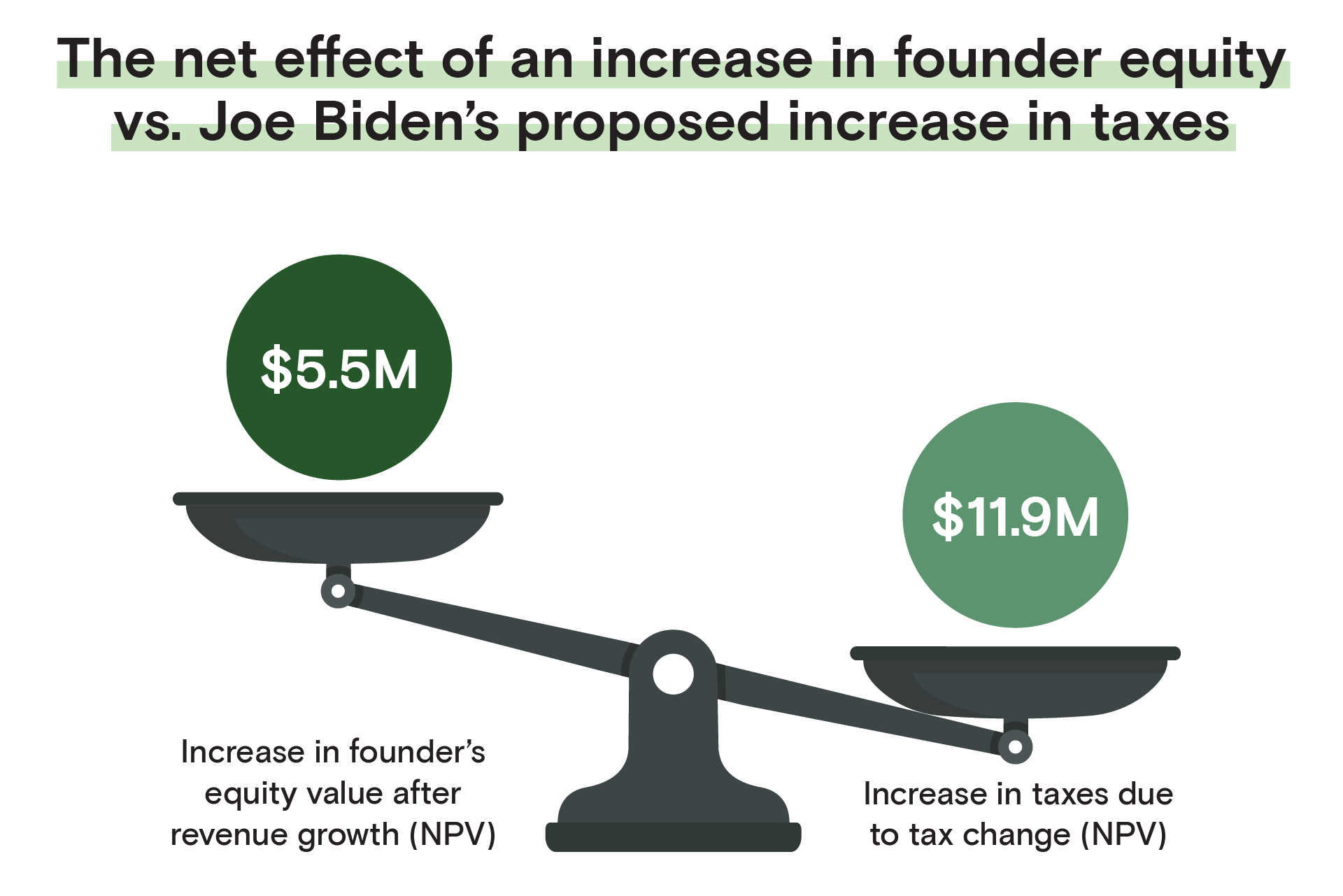 Also note that any other income the founder would have in that same year would be taxed at the top rate of 39.5%.

While the math will play out differently depending on a company’s growth rate and revenue, the dramatic increase in taxes paid (in this case, from $10M to $23.6M) could have a significant effect on proceeds to founders.

How likely is the tax code to change under a Biden presidency? Will capital gains tax change in 2021 or 2022?

Like other bills, Biden's proposed tax changes will need to pass through Congress before landing on the president's desk for ratification. Because the Democratic party retained control of the House and obtained an even split in the Senate (with vice president Kamala Harris acting as the tie-breaking vote), what likely wouldn't have happened under the previous Congress is now a possibility.

Evaluating the probability of a tax change in the broad strokes of Democrat vs. Republican is an incomplete assessment of the positions of individual congress men and women, but the ball certainly appears to be bouncing on the blue side of the court.

We’re not political analysts, so we can’t tell you how probable it is that Biden's bill would pass Congress without any significant alteration changing the impact on founders. We can as investment bankers, however, speak from our own area and say that:

How Founders Should Prepare for a Potential Tax Change

To prepare your company to sell in the event you want to transact before any changes take place, then you as a founder should:

Founders who take these necessary steps will be on the right path to conduct a timely transaction in the event that all signs point to tax hikes. To take the first step, speak to a qualified, unconflicted investment bank.

Modified on Mar 15, 2021
News
::
Insights
Receive monthly insights about what a founder should know along the path to exit.